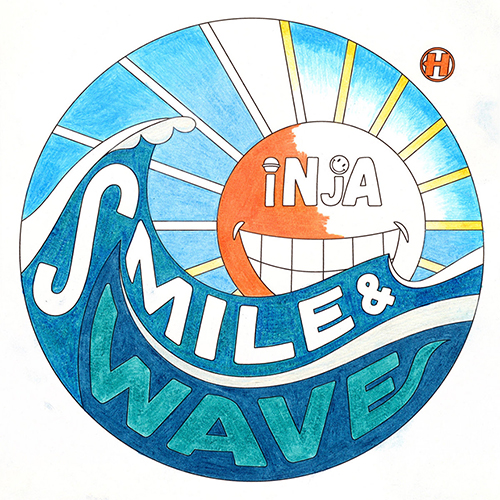 Album title track ‘Smile & Wave’ is the musical embodiment of Inja’s playful demeanour. Known for being the world’s smiliest artist, Inja wrote and recorded this feel-good bouncer alongside his daughter who is “pretty much the first person to hear anything” he’s up to musically. Expect a rude bassline and infectious wordplay.

Inja has established himself as a pinnacle figure within the realms of drum & bass. Loved for his ability to express his thoughts into honest, relatable lyrics in ‘She Just Wanna Dance’, a spoken word piece for Amnesty International that was a viral online hit in 2017, and more recently switching it up to ‘We Just Wanna Dance’ during the UK lockdown, expressing his desire to be reconnected with ravers again. Then picked up by BBC News and Sky News. On top of being the MC of choice for drum & bass powerhouse group Kings Of The Rollers, Inja is no stranger to tearing things up on the airwaves with support from the likes of DJ Target, Rene LaVice and Danny Byrd on BBC Radio 1 over the years. Since his debut ‘Blank Pages’ album on Hospital Records in 2018, Inja has flourished as a multi-talented MC, vocalist, singer and songwriter with a series of singles including the Beatport Drum & Bass chart-topper ‘Game Face (Stay Alert)’ alongside Whiney, as well as the infamous ‘Lumberjackin’’ on Serum’s Souped Up.