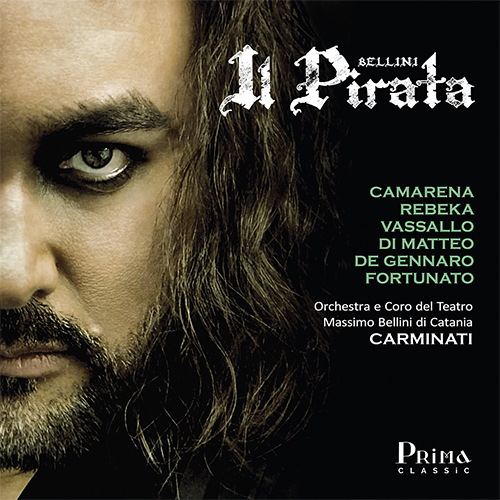 This new studio recording of Bellini’s Il Pirata in its uncut version includes all the repetitions, original cadenzas and variations written by the singers, as well as the rarely performed finaletto.

Prima Classic’s aim is to present to the public this masterpiece of composition, beauty, and of incredible technical demands on the soloists, performed by some of the most prominent singers of today. With Javier Camarena, Marina Rebeka, and Franco Vassallo performing the leading roles, this album was recorded at Bellini’s homeland, Catania, with the Orchestra e Coro del Teatro Massimo Bellini, under the baton of Fabrizio Maria Carminati.

This relatively rarely performed opera stands out in the bel canto repertoire for its original musical resources applied by a young but undeniably genius Bellini, who was pushing the limits of the musical traditions of his time. Particularly original is the chorus of the Pirates with the echo effect: this genial page drew a clamorous success and was defined by a critic at La Scala “…a masterpiece of musical science”. A mature Rossini told Bellini in a brief meeting they had in August 1829: “I have known in your operas that you begin where others have ended.”