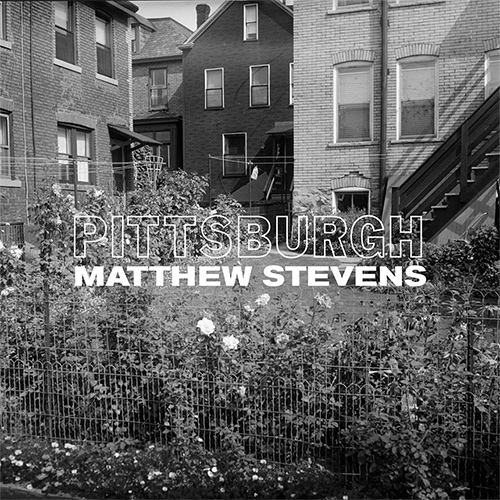 He may not have known it before, but Toronto-born, New York-based guitarist Matthew Stevens, prized for his forceful, distinctive electric sound was an ideal candidate to make an album fully devoted to solo acoustic guitar: the intimate, unadorned, straightforwardly titled ‘Pittsburgh’.

September 2020, Stevens was hunkering down in his wife’s family’s hometown of Pittsburgh, while navigating his way through the crisis. He had with him a vintage Martin 00-17, a small-body mahogany guitar. Practicing daily on the Martin, he began generating a series of short song “starts” – ideas and sketches he thought might lead somewhere. Then one rainy Pittsburgh day, Stevens’ bike slid out from under him and he broke his right elbow.

Rather than getting derailed musically, he became immersed in a creative process that led straight to ‘Pittsburgh’: a document of those short song “starts” from the notebook, now hatched as completed compositions. “Playing this music became a big part of my rehab,” Stevens recalls.

As the album took shape, it became clear to Stevens that he was headed in the direction of a wholly unaccompanied recital, with no overdubs or sound layering of any kind. Just him and this special Martin, two Neumann U89 mics and enough peace of mind across two separate sessions to make ‘Pittsburgh’ the triumph that it is.

In addition to his extensive high-profile work with Esperanza Spalding (serving as co-producer on ‘Exposure’ and ’12 Little Spells’), Stevens is also a member, songwriter and co-producer of Terri Lyne Carrington’s GRAMMY-nominated Social Science band. He has made vital contributions to groups led by Dave Douglas, Linda May Han Oh, Christian Scott aTunde Adjuah, Ben Williams and more. With tenor saxophonist Walter Smith III he co-leads the In Common collective. Stevens has also amassed many credits beyond the jazz world, collaborating on forthcoming releases by Anna B Savage, Jamila Woods, Tyler Armes (Murdagang) and Berlin-based electronic artist Robag Wruhme.