Tony Gaughan has a great music emporium in Glasgow called Blitzkrieg Shop. I asked him how the shop came about:

“My musical memories started when my sister took me to the Glasgow Apollo Theatre in 1973 to see T-Rex, I was 9 years old. This and two Sweet shows in 1974 set me up for life. I started listening to punk rock at around 15 years old and started playing in mainly indie bands in the 80’s.

I amassed a fine collection of guitars, records and music which was expanded by doing some work as a music reviewer and critic. This enabled me to obtain a collection of signed music related product.

I have always been involved in the Glasgow music and invested in Glasgow indie record label ‘Neon Tetra Music’.

A friend asked me to run his store in a new Glasgow project ‘Colab’. This was a project in Glasgow shopping centre. ‘Collaboration over Competition’ was a group of new businesses working together. Due to high rent increases we moved out and I was offered my own place.

My first sale was to a couple of teenagers who bought Dead Kennedy’s and Vibrators vinyl Whilst I was shocked but flattered, they even knew who those bands were I had an immediate desire to keep these records for myself feeling a part of me was disappearing I didn’t really want to lose. I also had a couple of guitars mainly to display and someone offered to buy one and I sold this. I decided if I could expand and create a hub that sold music art memorabilia, I should be on to a winner.

The shop soon expanded to new vinyl when I kept being asked for it and I decided to buy a vinyl cleaner to give some of the well-worn records a new lease of life – I rolled this out as a service which again has been a real success. If I cannot repair, I upcycle to make a clock or something else.

The name for the shop was an homage to one of my favourite bands, the Ramones, and I have assembled some likeminded individuals to recreate what we have seen back in the day.

I decided to move the shop to bigger premises near the legendary Barrowland market area which has a real musical heritage. It is fair to say that Blitzkrieg is going down a bomb with the record buyers of Glasgow.” 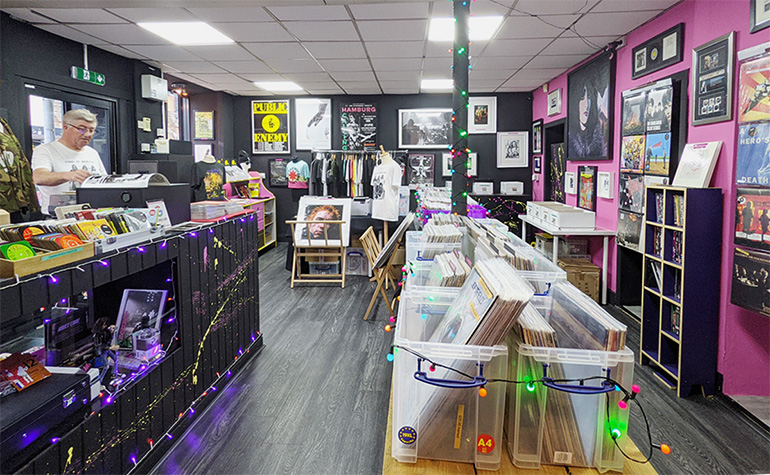 I asked Tony which Proper releases he was looking forward to.

“Having been a brief member as bassist with The Cosmic Rough Riders, before Alan Mcgee snapped them up, I’m looking forward to the re-issue of ‘Enjoy the Melodic Sunshine’.

The other album I’m very much looking forward to to the Bernard Butler re-issue ‘People Move On’ released on Demon Records. Not only is it double white vinyl but Proper have obtained signed copies exclusive to independent record shops.”