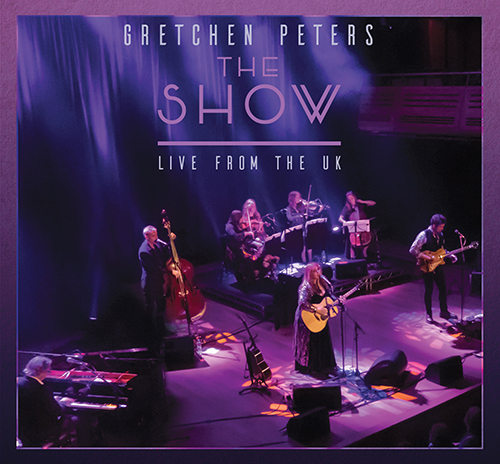 2022 marks the 25th year since US singer-songwriter Gretchen Peters first set foot on a UK stage and she is celebrating the anniversary in style with the release of a live album recorded during a 2019 UK tour with her band and an all-female Scottish string quartet, The Show: Live from the UK, out on August the 19th on Proper Records.

The Show: Live from the UK is a beautifully presented double-CD, featuring a hardback cover and a collection of evocative live photographs documenting the concerts at which the recordings took place. CD 1 captures 10 tracks Gretchen and her band performed with the string quartet and CD 2 highlights 8 tracks from Gretchen and her band.

Commenting on her new album, Gretchen said: “The whole time we were on the road, I was so aware of the privilege it was to play with these musicians every night. And it was really important to me to document that with this live record. We knew from experience that we would have enthusiastic and supportive audiences in the UK. And that’s, frankly, probably the main source of the energy and the joy that we played with.”

“Living through the last two years of this pandemic, sifting through these recordings which sounded more and more precious to me the further we got from live music, I became convinced that there’s nothing – absolutely nothing – that can replace the magic of several musicians and several hundred people in a darkened room having a moment together.”

UK Music publishes its This is Music 2022 report

ERA conference goes into the metaverse