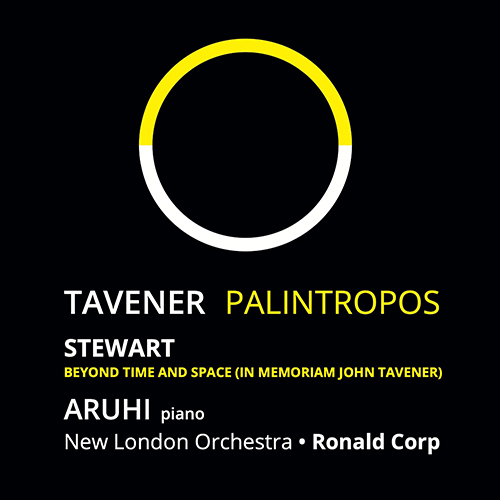 The World Premiere Recording of John Tavener’s ‘Palintropos’ for piano and orchestra performed by the Japanese pianist ARUHI with the New London Orchestra conducted by Ronald Corp. The work is coupled with Michael Stewart’s ‘Beyond Time and Space (In Memoriam John Tavener).

With the exception of The Whale and Celtic Requiem, the earlier music of John Tavener has been somewhat eclipsed by the mid to late works such as The Protecting Veil, The Ikon of Light and The Veil of the Temple. Here is an opportunity to discover one of Tavener’s early masterpieces. Dating from 1978 it was composed was flanked by his chamber opera A Gentle Spirit (1977) and Akhmatova Requiem (1978).

“…the only piece of mine that ever came near to being a Debussyan tone poem.” – John Tavener on Palintropos for piano and orchestra.

Palintropos is one of Tavener’s most dynamically works in his output and alternates between columns of sound of exhilarating, ferocious pianism and lyrical arabesque-like passages of sheer beauty.

In this World Premiere Recording of John Tavener’s ‘Palintropos’ the pianist is the brilliantly talented Japanese pianist ARUHI (making her debut commercial recording) and she is accompanied by the New London Orchestra conducted by Ronald Corp.

Also on the album is Michael Stewart’s ‘Beyond Time and Space (In Memoriam John Tavener). A three movement work composed for ARUHI exploring the nature of ‘consciousness’ and the idea of consciousness as information that exists beyond time and space that ultimately permeates the entire universe.