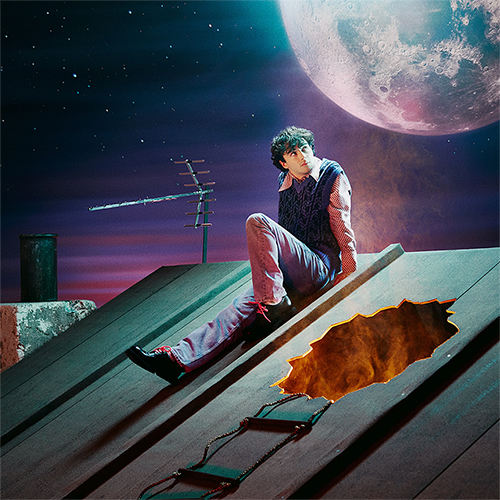 ‘Mellow Moon’ is the debut album from Alfie Templeman – an album that “feels like something of a miracle, landing somewhere between an otherworldly trip and a joy-filled ode to life back on earth.”

Like all journeys, the change in mood is palpable throughout Mellow Moon, with songs like the nostalgic ‘3D Feelings’ or ‘Broken’, which is about “all the little wobbles of being a teen and figuring yourself out,” that bristle with the energy of a life being lived again.

There’s nuance in there, too. Candyfloss suggests that life can sometimes appear too good to be true, something Alfie has felt since was a kid. “There’s always a downside to the cool shit,” he says. “Candyfloss is what it all appears to be until you get deeper into it.”

The result is an easily accessible comfort place. Across 14 tracks Alfie closes his eyes and imagines another world, one where he’s at ease and not distracted by life’s many challenges.

Inspired by modern influences like Steve Lacy, Khruangbin and Leon Bridges, as well as Alfie’s constant cosmic guide Todd Rundgren, Mellow Moon flows with an ease that belies its difficult creation. “It’s a moment in my life that I want to remember forever. I’ve put so much effort into this and it’s a real experience to listen to.”

Acting as both an intimate diary entry and a communal call to arms, Mellow Moon is Alfie’s most complete work to date and a platform from which he will surely use to propel himself further into the stratosphere. If ever proof were needed that music is a salvation or a transportative force, this is it.