Black City Records is Bristol’s newest vinyl retailer, joining the large number of independent record shops the city currently enjoys. What makes the store unique, not only among its Bristolian peers but across the whole of the South West is it is the only shop to specialise solely in Heavy Metal.

Black City was conceived when owner David Savage was 14 years old and had remained a distant dream until the middle of lockdown last year.

“I had always dreamed of owning a record shop since I very first got into music properly, sketching logos on the back of school text books and imagining plans as to what it would look like. It was all a bit of a fairytale though so never took it too seriously. When I left school, I fell into a number of jobs and ended up in marketing for the last 15 years or so. I was working for a financial brokerage and was put on furlough once COVID hit. They asked me to go back for a day a week in July 2020 and after just one day back thought ‘there really has to be more to life than this. I can’t do this anymore.’ I told my partner, Anna, of my despair over a few drinks a day or so later and the conversation arose about my dream of opening a record shop – to which she said ‘well, just do it then’. We had some savings set aside and a week later we had the company registered and were beginning to look for properties.”

Black City is located in the heart of Bristol city centre on Trenchard Street, equidistant between the O2 Academy venue and the city’s only dedicated Heavy Metal pub, The Gryphon.

“It was no accident we ended up where we are. We always thought if we are going to be a metal only shop then we have to open as close to The Gryphon as possible. When the Trenchard Street premises became available it just seemed perfect and business-wise they are our next door neighbours and we work very closely with them, from borrowing till rolls to borrowing staff.”

Bristol is well known for its amount of independent record stores ranging from larger names like Rough Trade to smaller shops and market stalls. There are a number of shops that specialise in dance music, reggae, punk, indie and beyond, but nowhere paying that much attention to Heavy Metal and its multiple sub-genres. David explains that on moving to Bristol it quickly became apparent that metal was just being given a cursory look at by other shops and that the best place to go to buy metal in the city prior to his opening was a major high street retailer.

“It was pretty shocking if I’m honest. Metal was just being given a polite bit of recognition, almost like because it had to be there. There was no great thought put into the stock. Second hand metal is touch and go at the best of times as people generally hold onto the good stuff (as you would), and new titles were just the same old same olds of what you would expect. Nothing groundbreaking at all.”

With a hugely successful opening day with over 150 customers queuing from 5:30am for the 10am opening, the shop has acquired a group of regulars and still sees new faces on a regular basis. However, the shop has not been without its detractors with one neighbour telling them on day one that “everything that has been here closes. You won’t last” and another who went into an abusive tirade that they didn’t stock Johnny Winter.

“I suppose every record shop has them, but yes – we have certainly had a few ‘characters’ shall we say.” 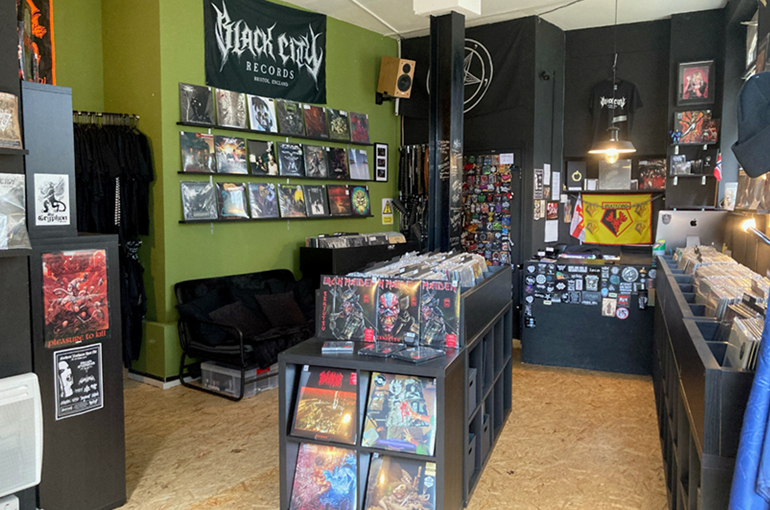 David says that his main inspiration for the shop came from a number of places. Oslo’s Neseblod (formerly the infamous Helvete run by the late Mayhem founder Øystein Aarseth aka Euronymous) and the late, great Shades of Soho which was located at St Anne’s Court off Wardour Street.

“Shades was the Mecca and vision for any metal record shop owner. It was just purely brilliant, whether it was LA sunset strip glam or the crusty grind that was emerging from the Midlands at the time, Shades covered it. That’s where we want to be with Black City. There is finally somewhere in the South West that isn’t just stocking more reissues of Kill Em All or Dopesmoker. If you are after that new Nekromantheon album or that old Re-Animator first press there’s somewhere you can come to find it and talk to people who are passionate about it and love it.”

As well as vinyl, Black City also stocks a range of CDs, cassettes, books, DVDs, shirts and other bits of metal merchandise. The shop has also now expanded to offer a mobile set up at festivals across the country and is also about to launch its own record label releasing in-shop sessions recorded by local bands.

“The buzz for the shop has been immense across social media and the metal scene in general, so we thought it was the decent thing to do to take out a mobile version of it to smaller festivals across the country – to give people who find Bristol a bit far off a taste of what Black City is. It’s been incredibly received and people are on the whole really grateful that we make the effort to come and see them. The label was born out of necessity really. We’ve had a few bands in the shop to record and play some tunes and we aim to release them as Peel Sessions type products – obviously named the Black City Sessions.”

With the shop making big waves across the underground metal scene in the UK, David’s plan is to just carry on the formula that works and remain true to the metal scene and nothing else.

“You won’t find us ‘diversifying’ our offering. We are a Heavy Metal record shop and nothing else. We stock everything from AC/DC to Zombified and everything in between, but if it doesn’t fall under that broad ‘Heavy Metal’ umbrella then we won’t have it. We’re not going to dilute what we do. You won’t find any indie or what not here… ever. We’re here for the metal community – 100%.”

I asked David about some of his favourite Proper releases.

Cannibal Corpse – Violence Unimagined
The Status Quo of Death Metal. You always know what you are going to get and you’re rarely disappointed. This one is special for us as it was the major metal release the day we opened the shop, so it will always hold a unique place. It’s Death Metal perfection from start to finish, filled with killer riffs, Alex Webster’s insane bass playing and George Fischer’s unmistakable vocals. I’ve loved Cannibal since around 1992 and they can still strike fear into the hearts of many younger bands out there, as this album proves.

Darkthrone – Eternal Hails
It’s pretty rare for a band that hasn’t played live in 25 years to be able to still garner so much respect and still acquire new followers. Darkthrone are truly masters of their own destiny and simply do whatever they want, whenever they want – regardless of what anyone thinks. Their latest ‘Eternal Hails’ follows on from 2019’s ‘Old Star’ in much the same vein of classic lo-fi Heavy Metal with elements of doom and d-beat making the mix. Though far removed from the raw Black Metal sound that made the band legendary, it is still unmistakably 100% Darkthrone through and through.